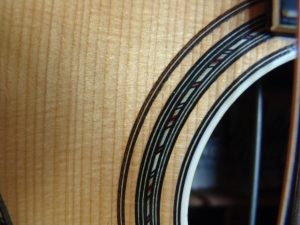 My friend Tony Klassen is a guitar collector turned builder. Tony has been collecting rare and fine instruments for about 30 years and he has a very intimate knowledge of some of the greatest instruments that have been made in this country. A number of years ago Tony started building guitars. Due to his insight into the old classics, he had a pretty good leg up on the competition. His company is Ark New Era Guitars. Check him out if you haven’t already.

One of the things that Tony has set about doing is to make replicas of all the guitars John Fahey played throughout his career. He has made a copy of the Ray Whitley Recording King and most recently the Bacon and Day Senorita. His Senorita model is absolutely spectacular. In both looks, playability and sound. A great feat for a one man shop.

Among other things, Tony has a healthy obsession with the instruments of Carl and August Larson of Chicago. The Larson Brothers worked together from about 1900 to 1940, building somewhere around 3000 beautiful and very unique instruments. It was a Larson guitar that set Tony down the path which eventually led to instrument building. He has become the go to repair guy for Carl Larson’s grandson Robert Hartmann, and has built many great Larson replicas for Robert.

Though not as devout, I share in Tony’s Larson obsession. A number of years ago, my friend and teacher Wil Bremmer at Spruce Tree Music showed me a couple Larson guitars and lent me Robert Hartman’s book “The Larson’s Creation”. I was really amazed at the amount of instruments the two brothers had made, the variety and the quality. As a result, Wil lent me a 1926 Stahl Style 6, as well as a 1929 Stahl Style 6, which I used to make my Ermida model.

On a recent trip to visit Tony, the conversation inevitably led to the Larson Brothers. From there, it eventually led to one of the purflings that the Larsons used. Being a fan of guitars of the early 20th century, I know a thing or two about purfling. I use lots of the stuff and have ordered it from most of the major suppliers. I’ve also made my own, a process which took quite a bit of figuring and is a lot of fun, though quite tedious. Anyway, I opened my big mouth and said that I could make a batch of the purfling for Tony. This was all true, I could in fact make the purfling, but it was also probably against my better judgement as it would require a bit of time and tie up a portion of valuable bench space in the shop. Nevertheless, it would be a good exercise and would keep my purfling chops up.

The vast majority of purfling in the old days came from Germany, where families honed there skills and developed tools to make really exquisite stuff. These days much of the purfling still comes from Germany, but there is at least one American manufacturer, Michael Gurian who is an incredibly knowledgeable figure and force of nature in the guitar building world.I started making my own because the dollar was down on the euro and it was a hassle to order from overseas and I didn’t want to use any of the stock patterns that were available from luthier supply companies. My friend Federico Sheppard gave me the basic instructions on how to make it and I was off and running before long. I’ve made a handful of batches of purfling, some historic designs, some of my own design. They help to keep my instruments unique and give me a little more connection to them. They do require time to make though.

Back to the Larson purfling which I had offered to make for Tony. The first matter of business was to determine the pattern for the purfling. Tony provided me with some very detailed photos of purfling from an early Stahl guitar and we went back and forth emailing our takes on the pattern. It turned out that the mosaic portion in the center of the purfling was made up of a repeating pattern of 27 veneers. The veneer that I work with are generally 6″ wide and 36″ long, so if you can imagine half a deck of cards of those dimensions, you can get an idea of where I was starting. 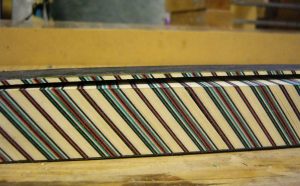 After laying out the pattern of the veneers, I glued them up into a long block. After the block was glued, I slice it into a bunch of small angled pieces. I then glue those angled pieces into a long block, off of which I can slice thin cross sections which will become the mosaic portion of my purfling. After each slice, I glue a piece of veneer back onto the mosaic block, which will serve the dual purpose of acting as a border to the mosaic and will also hold the mosaics together while I scrape them to the proper uniform thickness. It is an incredible amount of gluing, slicing, scraping and waiting. The reward is that you end up with a pretty good pile of purfling which you can’t get anywhere else.

After I had made up the first bunch of purfling, I ran a piece down to Spruce Tree Music to compare it to the stuff on Wil’s old Stahl. The result was right on the money and I wish I had taken a picture. I was more than happy.

I’m keeping enough of the stuff to make a couple more Ermidas and I’m sending the rest down to Tony, figuring that he’s doing such a great job on the Larson end of things, I can fulfill my curiosities by asking him. I’d just like to get a couple more out of my system first. 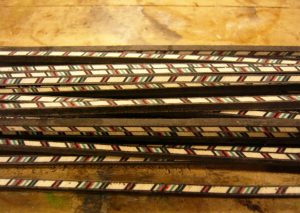