Tis the Season to Humidify 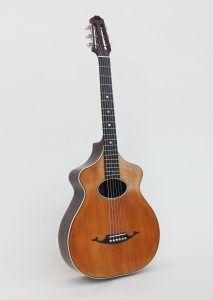 A few years ago, a friend in Italy turned me onto the guitars of Luigi Mozzani. Mozanni was a virtuoso guitar player who eventually began making guitars, harp guitars and mandolins. There is alot of great information on Mozzani and his instruments on Gregg Miner’s fabulous site, harguitars.net. Here is a link to the article on Mozzani.

One of the shapes that seemed to be very inspirational to Mozzani kept popping out to my eye. A double cutaway, which I eventually learned was referred to as a “wappen”, or shield guitar. The shape seems to have been developed in the early 1800’s and used primarily by luthiers in Vienna and Munich. Oftentimes the soundholes were places on opposing sides of the fingerboard. I think that the reason for this was to create a larger sound board, something like what Francisco Simplicio did with his D hole guitar.

After returning to the Mozzani article several times, I found myself making drawings of a six string wappen guitar. I think harp guitars are cool and all, but I hadn’t heard any music played on them which really inspired me (That has all changed now of course, but I’m not going to get into that here). I figured that a six string would be much more practical for my purposes. While I liked the idea of the soundholes on the side of the fingerboard, I initially opted to for a more standard soundhole placement. Eventually it evolved into an oval soundhole, partly to get a little more soudboard.

Originally the wappen guitars were on the small side, around 12″ at the lower bout. I wanted to go a little bigger, so I kicked it up to a 000 size, right around 14 3/4″ at the lower bout. I also pulled the waist in a little tighter and put a bit more of a curve in the cutaway. I wanted it to be easy and fun to play, so I opted for a 24.9″ scale length.

I finally had a period where things calmed down a bit and I was able to put a little time into building a prototype. There were a few little challenges along the way, but it went together fairly quickly and smoothly. I was very anxious as to what it would sound like. Initially the sound was a bit off. In the first day or two, it sounded like someone was sitting next to me, playing exactly the same notes that I was. As the days went on and it got more playing time under its belt, it really began to open up. It started to get louder and the sound looser. I was very pleased with how it was turning out.

Reactions to the new guitar have been mixed. As a friend in Texas put it, “Man, that new guitar is f*%@!ed up”, Others have remarked that it looks like a Selmer Macaferri. As it turns out, Macaferri was the star pupil of Luigi Mozzani and he incorporated some of the same elements into his designs. I’ve had a couple friends who are great players come to the house to check out the guitar. They are initially a bit reluctant toward the unorthodox shape, but they are quickly won over by the sound and the feel. While the cutaways don’t allow for optimal access up the neck, they do allow you a little more room to work.
Overall I’m very pleased with the way that the guitar turned out. Pleased enough to make it a regular model, and to name it after my great grandfather. I’m looking forward to getting it out into the world and hearing what other folks think about it. I’m sure it will continue to evolve as I make more of them, but for now I’m glad to have resuscitated a great design from a bygone era 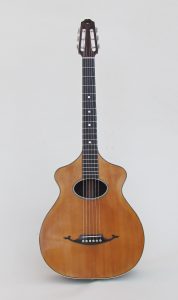 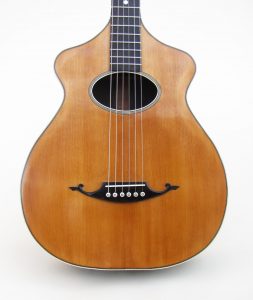 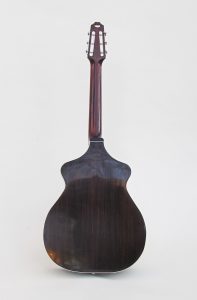