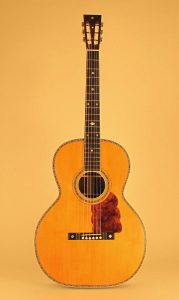 After having made a batch of purfling based on the stuff the Larson brothers had used, my mind had turned back to the Larsons and more specifically to my Ermida model, which is a copy of their Stahl Style 6. My Larson obsession renewed, I had to get an Ermida out of my system.

I had not built an Ermida in six years, during which time I’ve learned a few things and I wanted to put some of them into practice. When I made the first one, I made the best guitar I could at the time. I tried to make a faithful copy of the Stahl, and I think I did a great job. That said, there were a few things that I always wish I could have changed. So; Why put off until tomorrow what you could do today?

A few things about the Ermida model. First, it is named after my great aunt Ermida Fraulini-Gardella. Ermida was probably the fanciest of the seven Fraulini sisters. She was the first to leave the Missouri coal mining town where she grew up, heading for Chicago. She loved opera and spoke “proper” Italian. My family lived with her for a little while when I was a kid. I have very faint memories of her. My Ermida model is the only X braced guitar that I currently make. I named it after her because she was a classy trailblazer, characteristics she shared with the Larson’s instruments.

Onto the Larsons, Carl and August Larson worked in Chicago from around 1900 to about 1940. They are thought to have made around 3000 instruments in that time. That’s about 75 instruments a year, which is a very large number for a two man shop using traditional methods of construction. It is even more impressive when you consider the variety of instruments they made and that a number of these instruments were very ornate and some of the finest, most unique creations of that era. 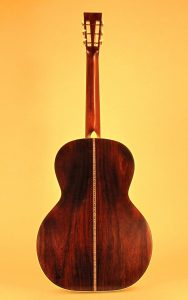 While the instruments that I typically build are exercises in minimalism, structurally speaking, Larson’s are on the other end of the spectrum. They are sturdily built and made to last. Some of their models have metal rods running from the end block, through the body and wrapping around the heel of the neck. They were some of the first builders to X brace their guitars, use laminated braces and to build tops and backs “under tension” (radiused in layman’s terms). While the builders I am primarily influenced by built instruments to breathe and flex, Larson’s built theirs to stay put. They are an exercise in rigidity. But, they still sound great. Just going to show you that no matter how much you think you know, you’ll never figure it out.

For wood, I decided to use some old German spruce that I had. Its tight grain was very close to the stuff on the old Stahls I had seen. For the back and sides, I had some Madagascar rosewood that I had been wanting to use on something special, and I figured this was the perfect project for it. Another thing that I wanted to do was an inlaid pickguard. I have been experimenting with making pick guard material and this was a chance to put some of it into practice. The guitar was assmebled 100% with hide glue. For the finish, I French polished a spirit varnish as that seems like the closest finish to what the Larson’s would have used. 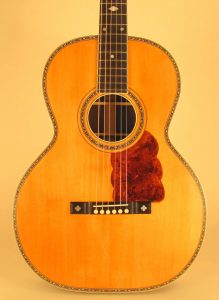 The guitar turned out wonderfully. With the purfling and the pickguard it looks great and the sound is fantastic. It’s loud, full and extremely present. It’s not quite as bright as an old one, but I have to confess that I did build it a little lighter. I couldn’t help myself. I’m looking forward to hearing it as it opens up.