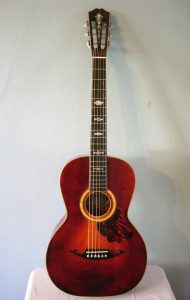 I’ve been curious about sunbursts for some time, but have had a few obstacles in my way.  For starters the guitars that I normally make don’t always seem suitable for sunburst.  Second, since I don’t spray my finishes, I French polish, I’m not really set up to spray a sunburst.  Third, a lot of sunbursts don’t really do it for me. 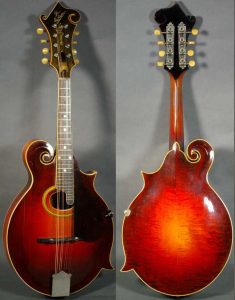 For the most part, the bursts I like are the very early ones, especially early Gibsons, when Orville still had his hands in things and they were still “The Gibson”.  After Orville left, they still did things the way that he did them and they still got great results.  I haven’t seen many old Gibsons in the flesh, and have come to these conclusions from looking at photos.  That all changed one day when I walked into my local music shop, Spruce Tree Music, and saw a very beautiful 1924 Gibson F-4 mandolin with a sunburst that delicately blended from yellow to red.  I was in love. Though mandolins aren’t what I build, I often look to them for inspiration and new ideas.  This was an incredible finish and I wanted to try my hand at it.

As I started to look into sunbursts I realized that there were a few different ways to do them.  One is to stain the wood directly, either rubbing the stain in with a rag or spraying the stain onto the wood.  Another is to tint the finish and blend the colors with a spray gun, so the color is in the finish, rather than in the wood.  I found out that the sunbursts that I really preferred were done the first way, by applying the colors directly into the wood, staining the wood itself rather than the finish.  This is the way that Gibson did their sunburst in their early days, presumably rubbing the stains into the wood with a rag, then applying varnish over the top.  As I don’t spray my finishes, this seemed like the ideal way for me to proceed.

I was not aware of any guitar makers who are currently doing these types of sunbursts, but quite a few mandolin makers are doing them.  Mandolin builders seem to collaborate nicely as they try to crack the secrets of Loyd Loar’s instruments.  I contacted a few mandolin makers and some great advice.  John Hamlett was the person who really seemed to have a method that would work well for me.  There’s a great video of him applying a sunburst to a mandolin on Youtube.  He recommended I practice on a lot of scrap, so that’s where I started. 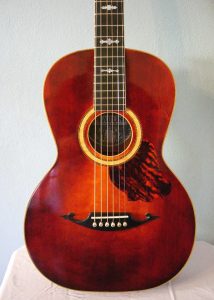 Once I felt like I had a grip on the technique, I decided to try it on a guitar.  Luckily at the same time I had a most excellent customer who was willing to let me build him a guitar with a sunburst.  I didn’t want to have a customer’s guitar be the first one, so I decided to build a practice guitar as well.  For both of them, I wanted to keep the trim relatively simple.  I use a lot of mosaic purfling with multiple layers, colors and patterns, but I don’t think these details go well with a sunburst.  Things tend to get too busy and one element gets lost in the other.  I skipped all that and went with black and white straight lines, except on the rosette of one of them, when I gave a nod to Orville Gibson and bordered a maple ring with a black and white diagonal checker. 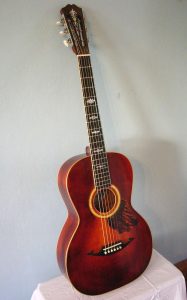 I used several old Gibson guitars and mandolins as my models and for the most part I used three colors, yellow, red, and brown.  After I had a blend of colors that I was happy with, I put down a few coats of an orange/green varnish, then French polished several coats over the top.  I was extremely thrilled with the results.  Applying the color directly to the wood highlights the figure of the wood in a way which having the color in the finish doesn’t seem to do.  It gives it a depth and softness which seems to be lacking in many modern sunbursts.

Both guitars turned out wonderfully and a lot of folks have been smitten by them.  I just sent one off to the awesome customer who ordered one and the practice guitar is still looking for a home.  Let me know if you’re interested.  It’s an X braced 14 fret 0 sized peach, red spruce top, maple back and sides.  Here are some photos: 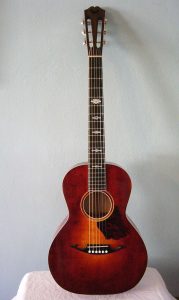 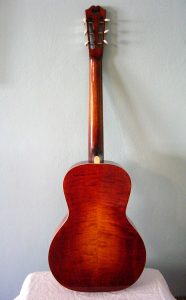 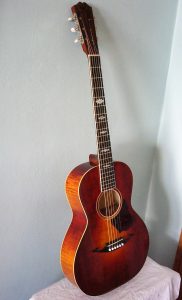