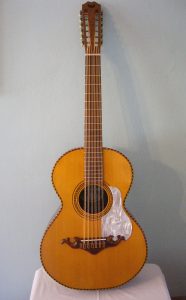 My friend Dan Margolies has had an interest in Mexican music which has gotten more and more intense over the years.  He started playing the bajo sexto a few years back and recently asked me to build him one.  The process has been quite an adventure and I thought I’d share some of the photos of the process.

The bajo sexto is a unique instrument, it’s main use is to accompany accordion or fiddle players in Northern Mexican, Norteno, and Tex-Mex music known as Conjunto.  The bajo player provides the boom chang rhythm behind the floating melodies, and fills in the space with bass runs.  The instrument has 12 strings, tuned down to the E of a bass guitar, across the board in straight fourths, E-A-D-G-C-F.  The string gauges start at .026″ and end at .092″.  And you thought the .066″ for the 12 strings were fat!  This is not to be confused with the guitarra doble, which is a different Mexican 12 string, the type which Lydia Mendoza played, similar to the 12 strings I normally build.  Here’s a nice clip of Lorenzo Martinez on accordion & Rodolpho Lopez on the bajo quinto (the ten string version, which omits the low E string).

The man who defined the modern bajo sexto was the great Mexican American luthier Martin Macias from San Antonio, Texas.  Macias bajo sextos and bajo quintos are much sought after by bajo players.  The Macias family is still going strong with George Macias now following in the footsteps of his grandfather Martin and his father Albert.  George builds beautiful instruments and makes fine strings.

At the start of this project, I didn’t know much about the bajo sexto and I wanted to get my hands on an old Macias to see how they were made.  My friend Steve James, one of the finest proponents and practitioners of American fingerstyle guitar, knew Don Martin Macias in San Antonio, used to hang out at the shop and has acquired a couple Macias instruments over the years.  Steve graciously loaned me a late 1950’s bajo quinto to use as a reference. 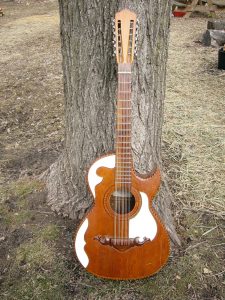 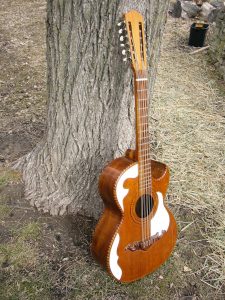 One of the things that really appealed to me about Steve’s Macias was the use of all domestic woods.  The back and the sides were walnut, as were the fingerboard and bridge,  the top was white pine, the neck was magnolia and walnut.  The rope binding was made up of walnut and magnolia.  The guitar was built very sturdily, one of the reasons it was preferred by working musicians, it can take a lickin and keep on tickin.  The neck joint was a Spanish heel, or slipper block construction, where the neck and block are one and the sides fit into slots in the neck.  The bracing was a ladder/X hybrid.  One feature which seemed odd at the time was the lack of a saddle on the bridge.  The strings came out of the front of the bridge without going across any sort of hard material like bone or metal.

The challenge for me was to build something that was respectful to the Macias instrument, and to make a few changes that might improve the playability and put my own touch on the guitar.  For starters, I decided not to do a slipper block neck joint.  I have never done this before and I didn’t want to start on an instrument that was fairly new to me and one which was going to be putting some fairly hefty demands on the neck joint.  I went with a dovetail, a joint that I’m intimately familiar with, and one which can be reset at a later date if need be.  Second, I decided I would fit the bridge with a saddle, which I thought would improve tone and would give a little control over the action of the strings.  Third, I decided to do a standard 12 string headstock, rather than one in which the fingerboard ran beyond the nut as it did on the Macias.  My friend Dan wanted an instrument that was like an old Macias, built with domestic woods, hide glue, varnish finish, etc, but was a little easier to play. 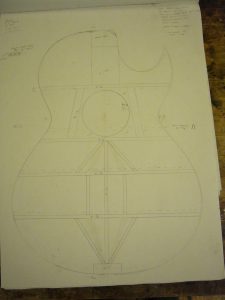 I started by making a plan of the Macias, mapping out the unique bracing style.  Second, I had to make up the rope binding and the purfling to be used on the rosette.  I used walnut and maple for this step.  Making the binding was fairly straightforward, more so than installing it, which proved to be quite challenging.  Steve James told me that Don Martin Macias would do the binding one piece at a time, and I was tempted to go that route after some of the frustration involved in the method that I used. 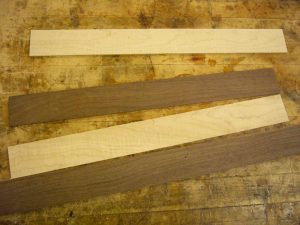 Maple and walnut strips for binding 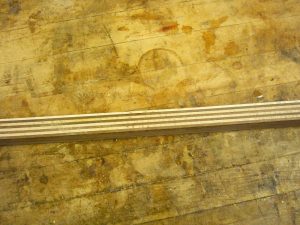 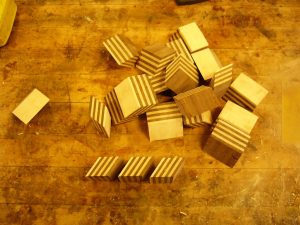 Stack is cut into angled pieces 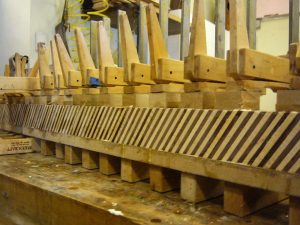 Angled pieces are glued together 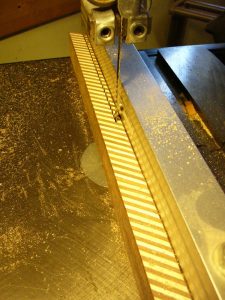 I used red spruce for the top and black walnut for the back and sides.  The walnut that I used came from a tree that I cut down back when I was a carpenter.  The tree was on the site of a house I was building and I had it milled up by a local farmer.  I’ve used it for various projects over the years and had reserved a couple pieces for a guitar.  I was glad to finally put them to use on this project. 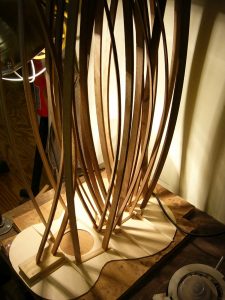 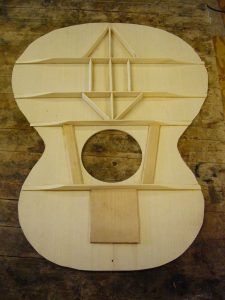 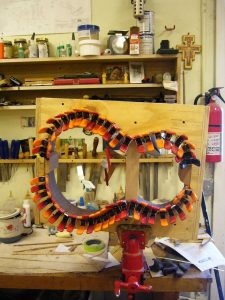 Dan wanted a full bodied bajo, as opposed to one with a cutaway.  He also wanted a single pickguard, rather than the three that are on the Macias.  I was able to get some great mother of toilet seat material for the pickguard (old stock) which gave it a nice vintage look.  As I stated earlier, I fit a saddle to the Macias bridge, which presented some design challenges, but worked out great.  I finished the guitar with a spirit varnish applied by French polishing.  I’m very happy with the way it turned out.  A fun project with many unique challenges.  I’m tempted to build one for myself. 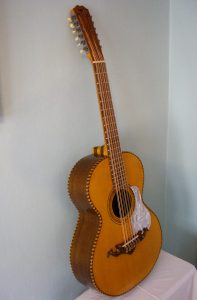 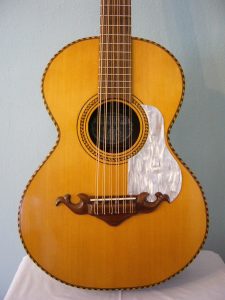 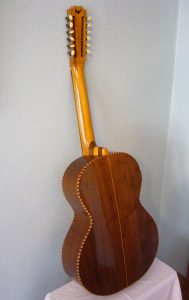 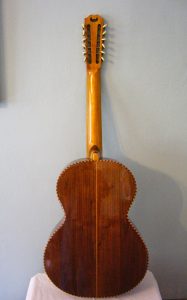 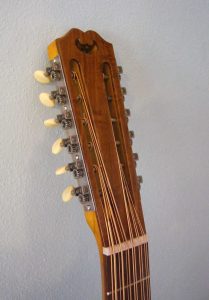 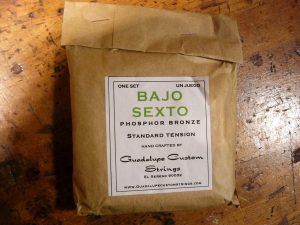