Guitars (and banjo) For Sale

Guitars (and banjo) For Sale

I’ve been going through some of my old guitars and have decided to sell off a few.  Please contact me if you’re interested or if you have questions todd at fraulini.com. 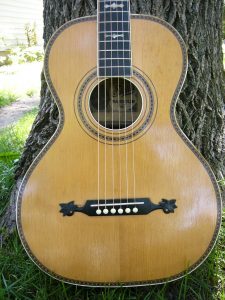 1920’s Stella Concert Guitar – This is the first Stella that I’ve seen with this type of bridge.  The bridge was likely made in Germany, along with the inlays and purfling.  I’ve had this guitar for a number of years.  The original bridge had been broken at the saddle and I hesitated to make a reproduction of it.  I finally got around to it, making the bridge out of ebony instead of pearwood.  It turned out great.  This guitar is in very nice shape.  I think that the bridge broke early in its life, saving it from a lot of playing wear.  There is a side crack on the bass side which has an old repair.  It could have been cleaner, but it is stable.

The top is crack free, as is the mahogany back.  Leabelly style purfling on the top and on the back.  Stella inlays on the fingerboard.  Interestingly the label reads “Stella Mandolin”.  They must have run out of guitar labels that day.  The neck is mahogany and is 1 3/4″ at the nut with a soft V profile.  It has a fresh neck reset with very comfortable action.  Original tuners, bridge pins and end pin.  The scale is 24 7/8″ and the lower bout measures 13 1/2″. Comes with a hard shell case.  A great little guitar SOLD 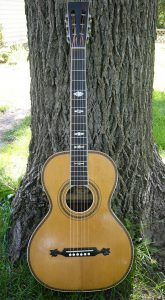 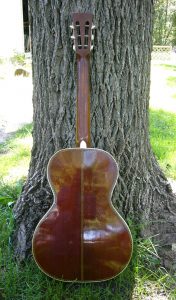 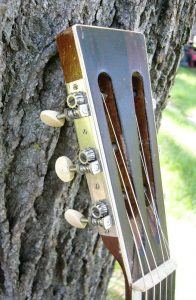 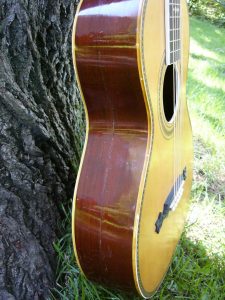 Bass side side crack 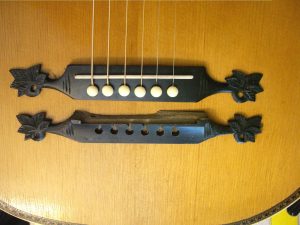 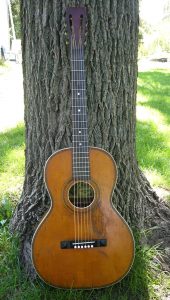 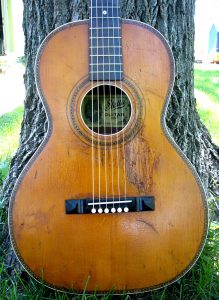 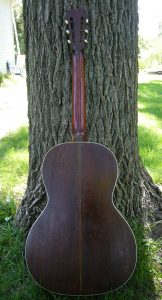 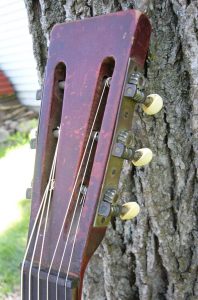 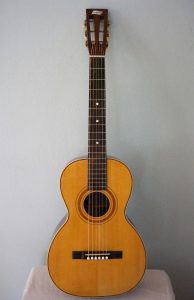 Teens Era Thornward Guitar-Probably made by Lyon and Healy and sold through Montgomery Wards this is a great parlor guitar.  After much debate, I made the decision to replace the top and in doing so the guitar became the best of both worlds.  The varnish on the top really makes it look old.  I’ve shown it to quite a few people, even some experts, and no one knew that the top was not original until I told them.  The back and sides are Brazilian rosewood, the top is ladder braced to accept light gauge strings.  This guitar sounds exceptional.  Original ebony fingerboard with new frets, new ebony bridge with flattened pyramids.  There are a few repaired cracks on the back which are reinforced with linen.  Original tuning machines with ivory buttons, and original ivory end pin.  1 7/8″ at the nut with a deep, yet soft V profile.  Includes a hard case SOLD 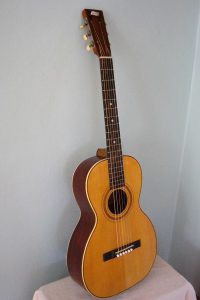 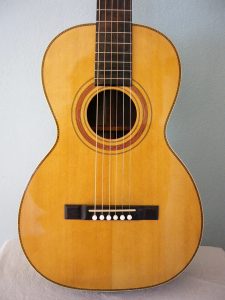 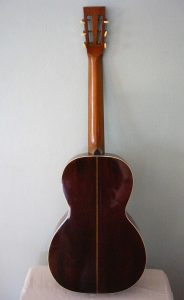 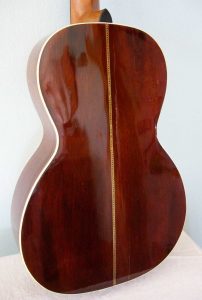 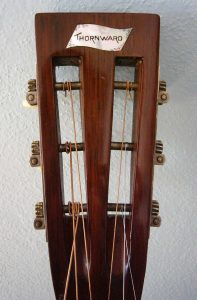 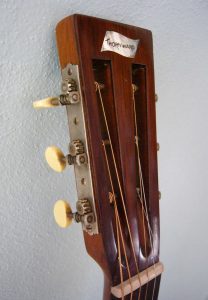 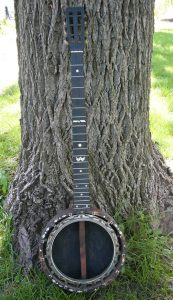 Keith Prowse & Co. English Banjo-This old girl is a cool instrument that needs some TLC.  It was made in London, probably in the 1890’s.  Though there are six tuning machines, it was intended to be a five string banjo.  There is a brass tube which runs under the nut and fingerboard and pops out of the fingerboard at the fifth fret.  The string would then ride over the sixth fret (you can see it in the fingerboard photo).  This was a way of getting around the fifth string peg.  Resonator has a Brazilian rosewood veneer.  The rim is missing some inlays, as is the fingerboard.  With a little work it could get up and running.  Sold as is SOLD 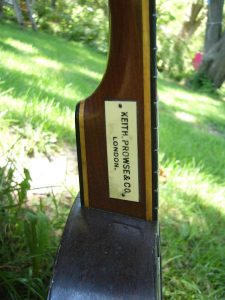 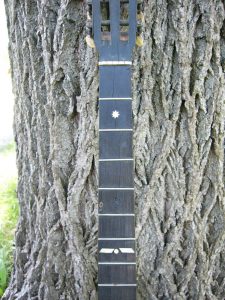 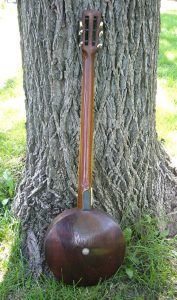 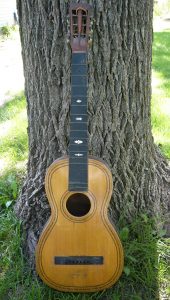 Unknown Handmade Guitar- This guitar was most certainly made by an individual rather than a shop, I would guess it is from the late 1800s.   The spruce top has a few cracks. The bridge is not original.  I think the back is a single piece of sycamore.  the sides and neck also seem to be sycamore.  There is a nice monogram painted onto the top.  The inset purfling seems to have been put in one piece at a timeThe tuning machines appear to be original.  They are in good shape and have bone knobs.  An interesting piece.  Sold as is SOLD 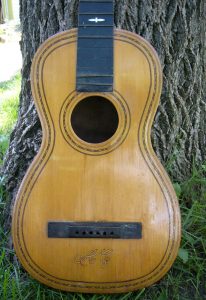 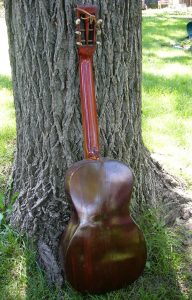 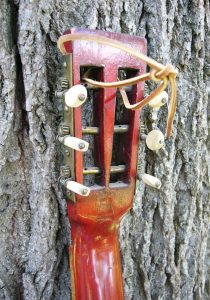