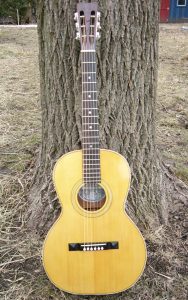 I recently finished an X braced Annunziata which was inspired by a friend’s O sized Martin from the 1890s.  The Martin was made for gut strings, but I wanted to make something lightly braced for light gauge steel strings.  I was curious about X bracing one of my existing models and the Annunziata was very similar in size and shape to the old Martin.  I also wanted to try a 24 1/4″ scale, rather than the 24 7/8″ scale that I typically use on that model, thinking that the slightly shorter scale would make it a little more loose and fun to play. 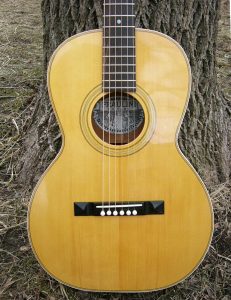 My goal wasn’t to make a copy of a Martin, but rather to make a Martin inspired guitar.  I was trying to imagine what one of the early Italian immigrant luthiers may have built if they were copying a Martin.  Though the majority of them never built in that style, there are a few examples that have survived.  They would typically add a few Italianate touches, but I wanted to keep things a little subdued. 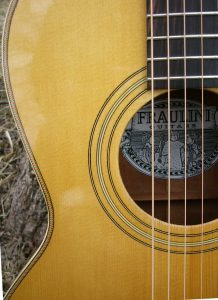 I used some old German spruce for the top, and Honduran mahogany back and sides.  I also made up a special batch of red and green herringbone for the guitar’s purfling.  Martin used to use something similar in the 1800’s, and I thought it had a very distinct look.  Keeping with the Martin tradition, I used an ebony fingerboard and bridge.  The finish is a French polished spirit varnish.

I’m very happy with the way the guitar turned out.  It’s very light in weight, it came in under 3lbs, and has a nice loose sound due to the short scale.  The look is nice and understated (compared to some of the other things I’ve been building lately).

The guitar is currently for sale at Spruce Tree Music, an excellent vintage guitar shop here in Madison.  Wil Bremmer, the proprietor, has been a great teacher to me over the years and I’m happy to have had the chance to make something for his shop. 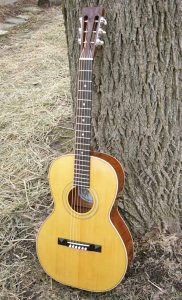 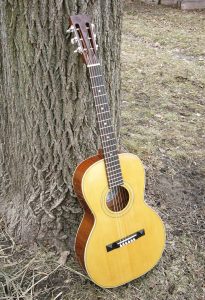 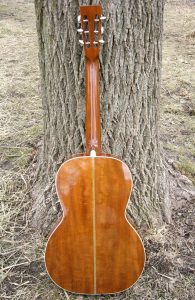